When connected via USB, almost all modern smartphones and portable media devices mount on computer as MTP (Media Transfer Protocol) drives. Unlike USB Mass Storage, which provides raw access to a storage device, MTP operates at the logical file level, and only provides access to selected files and folders on a storage device.

MTP devices show up as media drives on Windows computers. You can exchange content between the device and PC from accessible locations using the Windows File Explorer. On Mac, however, there is only limited native support for MTP devices. When you connect a smartphone (including iOS) or a portable media player as an MTP device on Mac, OS X opens iPhoto or Photos app where you can view and exchange photos and videos between the device and the Mac.

This might be convenient for iOS devices, as they only provide access to the Camera Roll in MTP mode. But MTP file transfer on other platforms like Android and Windows Phone are usually not limited to just photos and videos, which iPhoto or Photos app on Mac does not have access to.

In this article, we’ll explore how to mount MTP devices on Mac and access their contents just like you would on a Windows PC.

There are a few free and paid apps that let you access MTP devices on Mac. Usually, the free ones don’t mount MTP device (smartphone or portable media player) as a drive. Instead, they provide an interface to access the device content over MTP.

The app should automatically detect the device and let you browse the accessible folders within the app’s interface. You can also copy files into the device storage via simple drag and drop.

Update: Ever since OS X El Capitan update, Windows mobile devices are no longer detected by the official Windows Phone app for Mac. Microsoft has also discontinued support for the app and has taken it down from the Mac App Store.

But if you already have the latest version of the app (version 3.1.1) installed on your Mac, you can try the following third party workaround to get the app working on OS X El Capitan.

If you don’t have the Windows Phone App, there is still an app which allows you to transfer files between your Mac and Windows Phone devices. Commander One is a dual-pane file manager with a number of advanced features like hidden files listing, advanced file search, archive (ZIP) support. Most importantly, the PRO version of Commander One supports file transfer between Mac and MTP devices, including Windows Phone.

Once launched, Commander One automatically detects a Windows Phone as an MTP device when it is connected to the Mac. On clicking the Connect button, drives associated with the Windows Phone (Phone and SD Card) would be available in the drop down device menu in Commander One.

Just select a particular location on your Mac in one of the Commander One panes and choose the Phone or SD Card location in the other pane. To transfer files between Mac and Windows Phone, drag files from one of the panes and drop them on the other. The selected files will be transferred from the source to the destination.

You can download Commander One from their official website, which includes 15 day trial for PRO features. If you want to continue using PRO features post the trial period, you can purchase a PRO license (Personal) for $29.95. Additionally, there’s also a Team license (up to 5 Macs) for $99.95 and a Company license (up to 50 Macs) for $299.95. But, as a 7labs reader, you can get a special 30% discount on all Commander One licenses.

The apps mentioned above are specific to the device OS (Android or Windows Phone) and does not work with all MTP devices in general. So, if you have an MTP device that does not run on either of the two platforms, or you want to mount your MTP device on the Mac, the above free solutions might not be convenient for you. In such cases, you need suitable drivers to mount MTP devices as a disk drive on Mac.

SyncMate is an application for syncing content between the Mac and MTP devices (iPhone, iPad, iPod Touch, Android, Windows Phone or any other Portable Media Player). In addition to that, it also allows you to mount your MTP device as a storage disk on Mac, allowing you to access its contents directly in Finder.

For Android, SyncMate can mount the /sdcard location as a disk drive. The MTP driver lets you browse the Downloads, Pictures, Videos, Music, Ringtones folders, etc. The app can even mount iOS devices on Mac, providing access to a number of files and directories, including Camera Roll (available in the DCIM folder), Books, Recordings, etc.

SyncMate is available as a free download with limited features. To use the MTP mount, you need to upgrade to the Expert version, which originally cost $39.95 (Personal license) for 2 Macs. But as a 7labs reader, you can avail a special discount of 30% and save ~$12.00, when you apply the coupon code “SVNLBDSC” while buying or directly purchase from this page.

The following steps will help you to mount MTP devices as a disk drive on Mac:

A new disk drive should show up in Finder. You are now ready to browse and modify (if allowed) the contents of the MTP device.

If you know of any other free or paid apps that allow MTP device access on Mac, do let us know in the comments below.

#Mac #OS X
All posts on 7labs, including this one, are compliant with our Content Disclosure policy.
Keep in touch!

Managing mobile devices from Mac is one of the major issues of OS X. This is particularly because it does not support mounting of MTP drives, which is the default protocol used by most mobile devices for transferring data. If you have an iOS device, you can easily sync it with Mac using iTunes. But …

A lot of people often store sensitive information in portable storage devices, such as pen drive, external USB hard drives, etc. Sure, such devices make it easier to carry data on the go, but they are also vulnerable to theft. USB drives can easily get stolen, misplaced or get into wrong hands. And that’s why, …

How to lock external hard drive on Mac Read More… 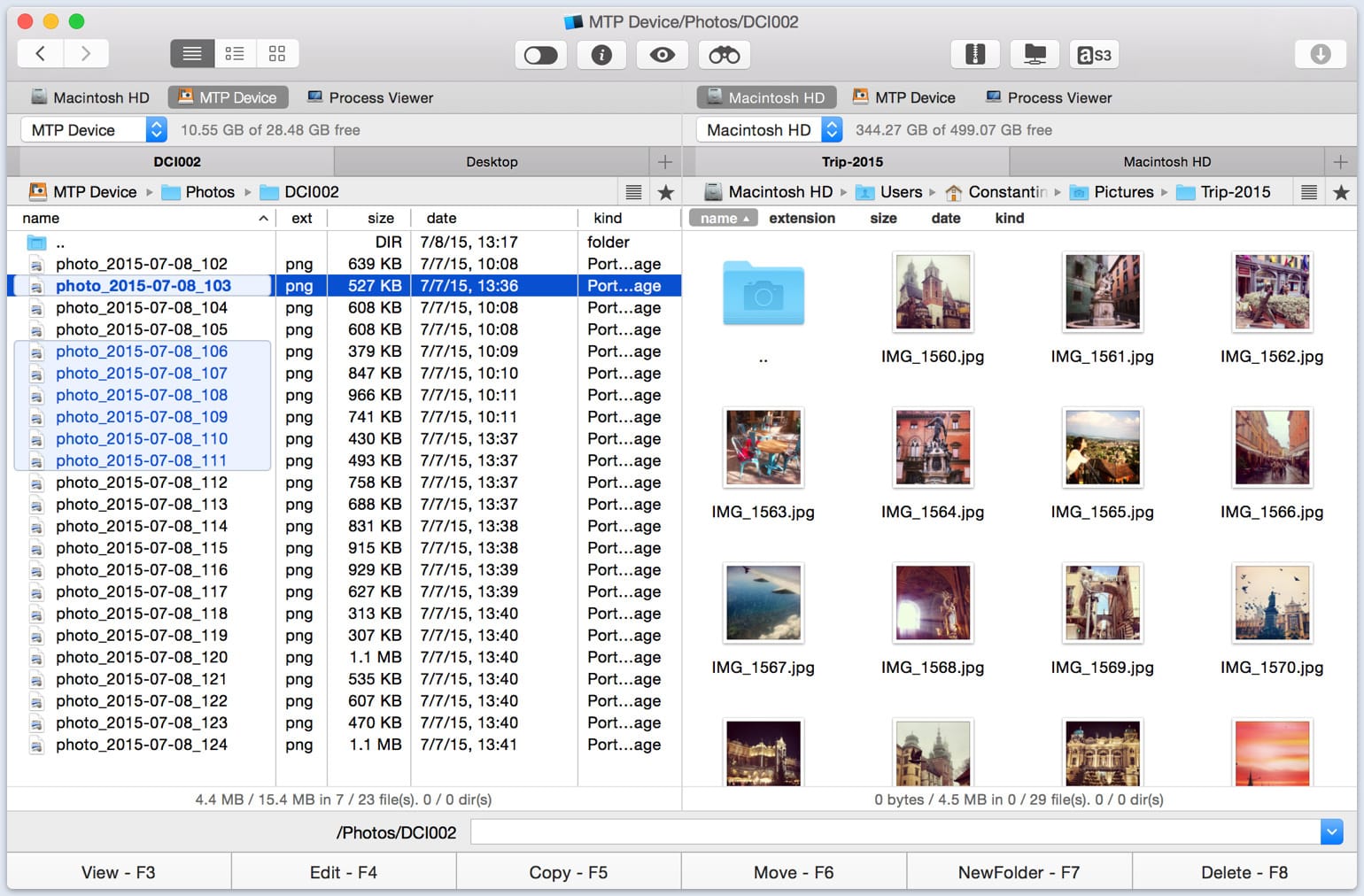 Commander One is a powerful dual-pane file manager and Finder alternative, which has been popularly regarded as Total Commander for Mac. The dual pane makes it convenient to transfer files between two different locations on the local drive, external drive or on a network. Below are some of the unique features of Commander One: • …

Deal Alert: Get 30% discount on Commander One PRO Read More…

The bundled software that comes pre-installed on every Mac is usually enough to help you get started straight out of the box. Even so, there are useful third party apps that enhance the usability and experience of OS X on your Mac. In this article, we’ll list down some of the essential third party apps …

Google serves cookies to analyze traffic to this site and for serving personalized ads. Learn more
Scroll to Top